Annular space seals require a 3 1/2 inches seating space. So can be use in very thin or thick walls The seals are ideal for small diameter pipes and larger diameter pipes through manhole openings or wall openings. Split versions may be used on pipes that are already in place.

The seals wrap around existing pipes, where small or large annular spaces exist.


For firewall applications: a silicone elastomer may be use with fireproof materials to create a fire wall between structures.

Multi-pipe and conduit sealing through one opening.

Multi pipes are sealed at the same time through the same opening.

Large diameter pipes may also be sealed with WA-GPSR-Seals, or when a small annular space exist that other pipe seal types cannot be used.

WA-GPW split pipe and conduit seal wrap around existing pipe and mechanically expanded to seal the annular space between the pipe and opening.

Split disc seals may be installed without taking the pipe out of service. 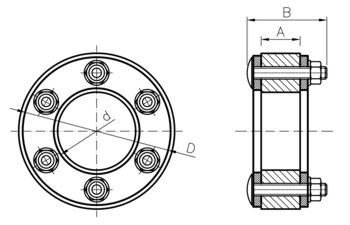 The inner opening installs around the pipe and the outer diameter installs in the opening in the wall. The seal element is then mechanically compressed to seal the penetration.

The seal element is EDPM and the compression plates are 304L stainless steel or 316L stainless.

Seal multiple pipe or conduit through the same wall opening.

The number of pipes or conduit that may be sealed through the same opening, is only limited by the opening size.

WA.GPWK split units: are used for sealing existing multiple pipe or conduit already through the wall. The split disc allows the unit to wrap around several pipes.

Snow melt heating multi PEX pipe enter a building through a wall opening. WA-GPW discs provide a watertight seal for the pipe supply system. The number of zones in the melt system varies according to heat required.

If the heating is an electrical power system, conduit or cord penetrations may also be seal with a multi port sealing system.

Multi service watertight seals for conduit and pipes through one opening, in basement walls.

When a large pipe flange must pass through a wall with the pipe.
Over sized core drill openings.
Smaller diameter carrier pipe in a large casing.
Where large annular spaces exist for other reason. 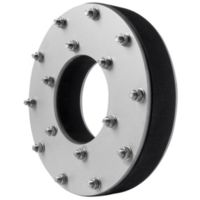 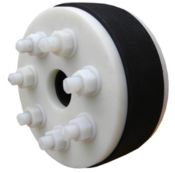 When used as end seals the port opening axially accommodates the leg height used on the existing carrier pipe.

WA-GPWP rectangular units have stainless steel compression plates and EDPM seal rubber. The sealing assembly may be a split version for pipes or conduit that already exist. A split version is used when long pulls are involved for conduit or pipe when longer runs are required after they enter a building. 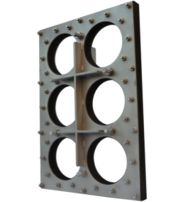 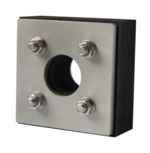 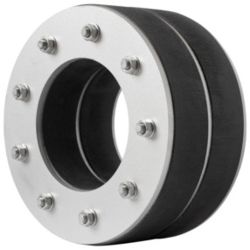 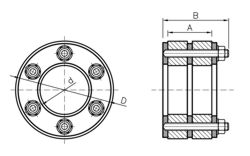 Double Disc-Seals for pipes are used when higher pressure seals are required  up to 5bar - 72 psi. (160 foot water head)

The elastomer may be, silicone, NBR or EDPM.

The elastomer may be mix to meet field requirements: E.g. one elastomer disk silicone and the other NBR or other combination.